"Encanta" and indie theatre in the 21st century


Free copies of a full-length play for virtual strangers is not how things are usually done. For the most part, people usually have to pay to see a performance or buy a published script. But with Encanta, I've been much more free-handed about things that I ordinarily would be.

However, it does make you wonder: why would a playwright without a job at a pie factory hand out a script for free that is probably worth charging money for?

The first reason is pragmatic: plays are ultimately meant to be performed, not just read. Production, not publication, is where it's at for a play. The text of a play is, in my view, closer to sheet music than to a novel. Reading Beethoven's Symphony No. 5, while very likely meaningful and enjoyable, is nothing compared to hearing even a recording of it.

Secondly, a lot of theatre hasn't quite caught up to how to reach out via social media beyond promoting the next show. I'm not going to change that by myself, but I do want to do my part to engage 21st century audiences beyond asking people to follow me on Twitter or "like" my Facebook page.

Then there's the fact that I have never given my script to someone and had them less interested in a live performance. The vast majority of the time, when I gave out my script, the person reading it said, "I have to see this live."

So, to me, this means that I need a different process for engaging audiences with my work.

I came up with 3 layers of engagement that I believe would be a good way to guide how I get my work to its audience from now on.

The first layer is the "Hey, I'm writing this play. Interested?" layer. I call it "Creation" in the picture because that's what was legible in the circle. 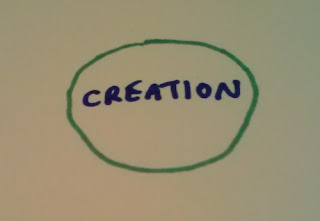 This part of the process is not just about writing the piece. It's about sharing my vision for what the play will mean to the audience. For me, one of the first things I ask is, "Who will see themselves here?" and "What are they going to see about themselves?" It's the appetizer and a taste of what's to come.

A story about a sorceress and a pirate falling in love is nothing spectacular in and of itself. But when I say that every single character is LGBTQ and Latin@/Afro-Latin@, that means something to people. People, especially people excluded and marginalized in arts and entertainment, care about that because they want to see themselves in ways they normally don't get to see themselves. So, they're immediately hooked and want to know more about where I'm going with it. This usually means a complete draft. Or several, in the case of Encanta.

From here on out, things are a bit more experimental.

The second layer is the, "Let's see what we can do online" phase. I call it "Virtual Event" in the picture because, again, it's legible and fits in the circle. This is the main course. 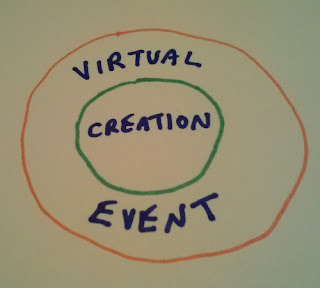 The first thing that came to mind for this was a livestreamed performance where the audience hangs out in a chatroom or on a Twitter hashtag. No camera tricks. No movie magic. Just what actors can do just from the strength of their performance. This includes readings, staged readings, and workshop productions. Not to mention interviews with the writer, cast, and crew, and so on. I believe this could be the main form most performances would take because they would by far be the most accessible.

I have no idea how the logistics of this where tickets and what not are concerned, but it's one of the ideas I had.

Finally, there's what I call "Live Event" (once again, because it fits and its legible), which in my mind I think of as the "Icing on the Cake" layer. 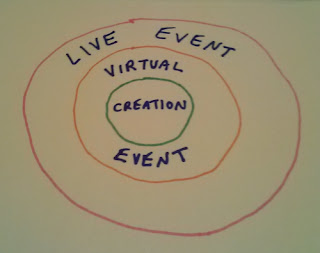 The great thing about these layers is that they are very porous. None of them has to work in isolation from the others. For instance, it's entirely possible to combine a live event with a virtual event.

Lend Me Your Ears

Players on this stage

. . . a lot of it [fostering rather than smothering students' playwriting] has to do with finding a way to construct a dialogue about ongoing work that empowers the writer. A lot of it has to do with making sure there's a diversity of voices around you. A lot of it has to do with thinking of the writing program as a brain trust for writers, not as some infantilization in which the dramaturg gets the power. And basically trying to find a place where everyone's aesthetic in the room grows larger rather than smaller. There are many ways to do that. It's really not a hard thing to do.
--Paula Vogel, interview with Ann Linden in The Playwright's Muse

Here is what seems to me an elementary truth that must precede any other: namely, that the theater, an independent and autonomous art, must, in order to revive or simply to live, realize what differentiates it from text, pure speech, literature, and all other fixed and written means.

I can take any empty space and call it a bare stage. A man walks across this empty space whilst someone else is watching him, and this is all I need for an act of theatre to be engaged.
--Peter Brook, The Empty Space

My work is characterized by one thing above all --- invention. In theatre we imagine the world, we do not record it, we are not documentary makers. I hold all social realism and journalistic theatre in contempt. It is a sordid habit. And the social realists have the impertinence to pretend they are 'telling the truth…'
--Howard Barker, interview

Women and writers of color are still seen as threats because, in essence, when a woman or writer of color is defining a play world, there's another definition of what our society is, and that's very threatening.
--Paula Vogel, interview with Ann Linden in The Playwright's Muse

Through this experience [working on " . . . and last week it was a mountain"] I learned the importance of the life and the dynamics under the words, and began to see the power of working from the silent space within - the emotions, the images, the experience and the feelings - rather than relying on the words.
--Sande Shurin, Transformational Acting: A Step Beyond

How does it happen that . . . the Occidental theater does not see theater under any other aspect than as a theater of dialogue?
--Antonin Artaud, Theater and Its Double

All conventions are imaginable, but they depend on the absence of rigid forms.
--Peter Brook, The Open Door

I never 'say' anything in my work. I invent a world. Let others decide what is being 'said'. Nor do I claim to tell the truth or enlighten people. We are suffocated by writers who want to enlighten us with their truths. For me, the theatre is beautiful because it is a secret, and secrets seduce us, we all want to share secrets. That is also its politics, if it has any politics at all. And modern democracies hate secrets, they want everything transparent. Obviously the critics collaborate in this desire to expose everything to the light of day, they are the police force, after all.
--Howard Barker, interview

I think that form is content . . . I've always been more interested . . . in the formal devices and the structure rather than in the subject matter . . . I really am a follower of Viktor Shklovsky, who said that in some ways the subject matter doesn't even matter. It's whether or not we see the subject matter anew that matters.
--Paula Vogel, interview with Ann Linden in The Playwright's Muse

I am well aware that the language of gestures and postures, dance and music, is less capable of analyzing a character, revealing a man's thoughts, or elucidating states of consciousness clearly and precisely, than is verbal language, but who ever said the theater was created to analyze a character, to resolve conflicts of love and duty, to wrestle with all the problems of a typical and psychological nature that monopolize our contemporary stage?
--Antonin Artaud, Theater and Its Double

The mediocre artist prefers not to take risks, which is why he is conventional.
--Peter Brook, The Open Door

"Transcendence became my life theme. I wanted to be lifted beyond everyday circumstances and everyday reality."
--Sande Shurin, Transformational Acting: A Step Beyond

I actually think of writing for the stage as not writing . . . It's about structuring, about gaps between the language that are really filled in by the collaborators and the process. It's all about indirection rather than a direct statement . . . It's like a three-dimensional chess game in a way. If I say this, will the director go in this direction? If I say this, will the actor respond? And one of the delights of the process is actually not having your intention fulfilled, but finding out at times that other people's interpretation or intention is actually more interesting than you originally thought of.
--Paula Vogel, interview with Ann Linden in The Playwright's Muse

The person who has an idea of what this language is will be able to understand us. We write only for him. --Antonin Artaud, letter, 9/28/1932